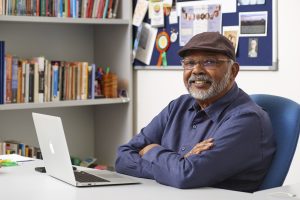 He had his early education at Methodist Boys’ Primary School, Kuala Lumpur and continued  at Methodist Boys’ Secondary School, Kuala Lumpur. He did his Higher School Certificate at Vanto Academy, Petaling Jaya. He obtained a Bachelor of Arts (Hons.) in English Literature, Diploma in Education (TESL), Master of Education in Teaching English as a Second Language (TESL) from University of Malaya and a doctorate in Literature in English from the University of Nottingham, England.

Malachi Edwin Vethamani is actively involved in the local and international literary scene. He is the Founding Editor of ‘Men Matters Online Journal‘ which was launched in December 2020. He was Head, School of English, University of Nottingham Malaysia from June to December 2020 and Professor of Modern English Literature from 2015 to January 2021. He was conferred the title Emeritus Professor by University of Nottingham upon his retirement in January 2021.

He was the founding dean of the School of Education, Taylor’s University (2011-2014) and also the founding dean of the School of Education, Languages and Communications, Wawasan Open University, Malaysia (March 2009 till Feb. 2011). He was with the Faculty of Educational Studies, Universiti Putra Malaysia (UPM) from 1986 till 2009. He started his teaching career as an English Language teacher at Maktab Rendah Sains MARA (MRSM) / MARA Junior Science College, Pengkalan Chepa, Kelantan in 1979. He left MRSM Jasin, Melaka in 1986 to join Universiti Pertanian Malaysian (later known as Unversiti Putra Malaysia).

He serves in various capacities with other universities. In 2015 he was appointed Visiting Professor at the School of Liberal Arts, Mahidol University, Bangkok, Thailand.

He was a committee member for the Special Projects (Private Universities) Cluster, Malaysian Professorial Council from 2015 to 2018.

He was the President of Malaysian English Language Teaching Association (MELTA) from June 2001 till January 2008. He was a Vice President of Asian Association of Teachers of EFL (Asia TEFL) from 2008 to 2013. He is currently an Advisor to Asia TEFL and a Trustee to MELTA.

He was a newspaper columnist for two Malaysian national newspapers. He had a monthly column in the New Sunday Times on English Language and English Literature from January 2015 to August 2016 and a fortnightly column in Sunday Star on teaching literature in English from 1992 to December 1994

He has authored two volumes of poems and a collection of short stories. He compiled the first bibliography of Malaysian Literature in English. He has edited two important volumes of Malaysian literary works on poetry and short stories, which cover a period of 60 years (1958-2018). He was the General Editor of the MELTA-Sasbadi ELT Series (2001 to 2008) and has edited and co-edited several scholarly works in the field of Teaching English as a Second Language (TESL).